[The following information is derived from the Personnel File for Ernest John Bates, held by Archives New Zealand.]

Bates was a month past his 20th birthday when he completed his Attestation on 22 September 1914.

Ernest John was born in Auckland on 15 August 1894, and cited his mother, Elizabeth Bates, of 1 Abbey Street Newton, Auckland, as his next-of-kin. He was unmarried, and an Anglican. He gave his occupation as 'letter-carrier', employed by the Post & Telegraph Department. His last New Zealand address was Lichfield Street, Newton, Auckland. At the time he was still serving in the No. 1 Post & Telegraph Territorials.

He appears to have served for just 1 day in New Zealand, from 22 September 1914, and embarked on NZ Troopship #8, on 23 September, arriving in Egypt on 5 December 1914. He would have undergone the standard training programme in Egypt from then. He was assigned the Regimental / Service Number 3/165.

On 12 April 1915 he embarked for the Dardanelles, and where on 9 September he was admitted to NZ Field Ambulance with Enteritis.

On 13 December 1915 he was Detached Lemnos (i.e. he was evacuated from Anzac Cove) and then disembarked at Alexandria 27 December, rejoining his unit on 18 January, 1916. On 26 February 1916 he was transferred to No. 2 NZ Field Ambulance at Moascar (Egypt). He then was Attached to 2nd Battalion, Auckland Rifles on 25 March 1916.

On 6 April he Embarked for France from Alexandria, and then, on 13 June 1916, he re-joined No. Field Ambulance.

His service was not without incident. On 8 July 1916 he was charged with 'drunkenness", found guilty and sentenced to 21 days Field Punishment No.2 This meant he was Detached to Detention on 9 July, rejoining his unit on 30 July.

On 15 October that year he was attached to a Pioneer Battalion, and served with them until 29 June 1917, on which date he rejoined No. 2 Field Ambulance.

He was then temporarily attached to another unit until 31 August 1917. 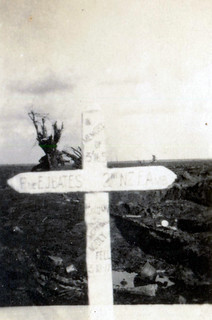 On 5 October 1917, he 'Died of Wounds' in the Advanced Dressing Station.