4 years older than Sandy, joined the Army December 1915. Occupation at enlistment was Blacksmith with NZ Railways Dept. He was 26 years old at enlistment. He served in Europe for 2.5 years in the NZ Engineers, returning to NZ in May 1919. For more see Ted's War Service details.

George was 2 years younger than Sandy, and aged just 20 when he enlisted in May 1916. He was a Farm Labourer. He served in Europe from November 1916 until he returned to New Zealand in June 1919, whereupon he returned to Kuri Bush, Otago. For more see George's War Service details. 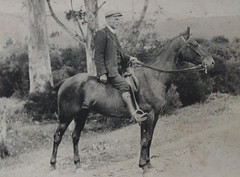 He was in the 14th Company, 2nd Battalion, Otago Regiment, and assembled for the attack on Bellevue Spur on the morning of 12 October, 1917.

He was not seen again.

A military Court of Inquiry in November 1917 found he was "Missing believed killed in the field". He was a few days short of 31 years 6 months old.