The personnel records of New Zealanders who served in World War 1 have been digitised by New Zealand's National Archives. They are also available to be searched online.

Reproduced below are snippets from documents within the individual records of Sandy, his brothers Ted and George, and their cousin, Alec Mee.

[Edwin Joseph Mulligan enlisted for service on 17 December, 1915. He was the 4th child of the family, and was four years older than Sandy.] 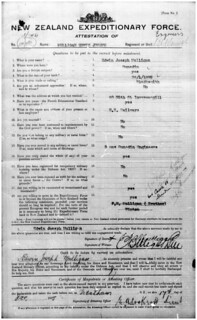 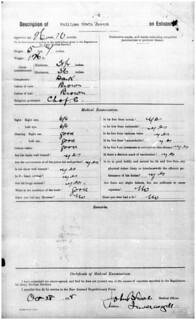 The citation read: "During the operations on the Somme. On the 15th September, 1916, he proceeded through a heavy Barrage to collect wounded. He showed the other bearers a splendid example of courage and self-sacrifice in the face of danger, and exhibited great initiative in bringing wounded back safely."

Ted admitted to No 14 General Hospital with appendicitis

ASM Detached to England on Leave (in the field)

Sandy rejoined No 2 Field Ambulance from leave in England

Ted: transferred from Walton to Hornchurch

Ted: transferred to No 2 NZ General Hospital, at Walton

Evidence & finding of a Court of Inquiry, in the field in Alec Mee's personnel file: "Missing believed killed 12 Oct 1917 during operations at Belle Vue Spur."